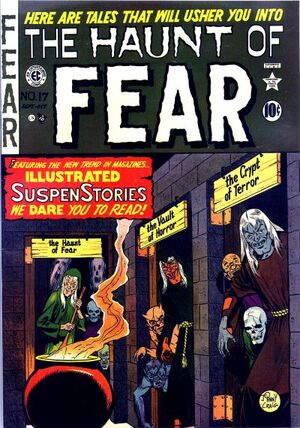 A construction engineer has recurring dreams of being buried alive and so visits a psychiatrist. Dr. Froyd interprets these dreams as subconscious indications of being 'buried under work'. The engineer resolves to inspect the concrete moldings of the latest project before taking his summer vacation. He doses off briefly, but when he comes to, finds they have begun pouring the concrete and, believing this to be yet another dream, begins to laugh and make no attempt to escape.

A television personality enters a haunted house with the camera rolling and comes to a bad end.

Appearing in "Horror Beneath the Streets!"Edit

Synopsis for "Horror Beneath the Streets!"Edit

The three GhoulLunatics accost Bill Gaines and Al Feldstein as they are finishing up an issue of Modern Love and closing shop for the night. The Old Witch chases them into the sewer where the Crypt-Keeper forces Bill Gaines to sign a contract, the Vault-Keeper forces Al Feldstein to sign one and the Old Witch gets her comic book deal in exchange for agreeing to let Al and Bill out of the sewer.