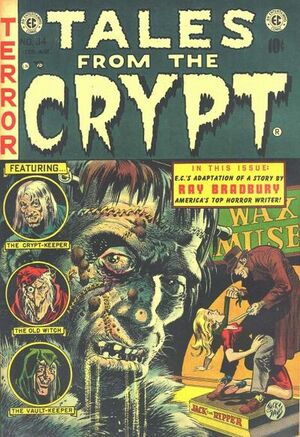 Appearing in "Mirror, Mirror, On the Wall!"Edit

Synopsis for "Mirror, Mirror, On the Wall!"Edit

A first person narrative where a man fashions a monster together out of artificial parts ala Frankenstein and transfers your brain into it. You stumble into a carnival's hall of mirrors and are killed by the sight of your own multiple ghastly images.

Two swindlers run a racket where they visit a small town and convince them there is oil present and get them to issue stock in order to come up with the check to begin drilling. One of them fakes his death and is buried in order to hide the money and default. Unfortunately for him, the other is a smoker and when he digs up his casket, it turns out there really is oil in the cemetery dirt. This oil has collected in the casket, and when the startled smoker lifts the casket lid he drops the cigarette into it which causes an explosion.

Appearing in "Attacks of Horror!"Edit

Synopsis for "Attacks of Horror!"Edit

This grim fairy tale tells the story of king Moneymad's tax scheme. He taxes the people for everything he can think of, until they have no money left to pay their 'thumb' tax, and he begins having their thumbs cut off. The peasants revolt and cut out his stomach.

Appearing in "There Was An Old Woman!"Edit

Synopsis for "There Was An Old Woman!"Edit

The employees of a mortuary are haunted by the spirit of an old woman who refuses to leave until they return her body to her.

Retrieved from "https://eccomics.fandom.com/wiki/Tales_from_the_Crypt_Vol_1_34?oldid=7843"
Community content is available under CC-BY-SA unless otherwise noted.