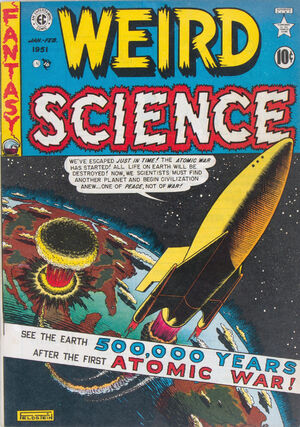 Appearing in "Made of the Future"Edit

Synopsis for "Made of the Future"Edit

1 of 4
Add photo
A jilted man stumbles over a group of time travelers who have returned to the year 1950. He returns with them and discovers that he can acquire a kit which will provide a mate in the future. He returns with the kit to 1950 and is very happy with the results, but one day his wife heads off to take the tour and disappears. She has left him to return to the future and he can no longer locate the group.

Half a million years after a group of Earthmen fled atomic war on Earth for another planet around a distant star, they return to the year 1950 on Earth only to find the threat of atomic war looming once more.

Appearing in "The Last War on Earth"Edit

Synopsis for "The Last War on Earth"Edit

A scientist gets the idea to end war by making it appear that Mars has bombed Earth so that Earth will band against Mars. He doesn't count on life actually existing on Mars, so he gets an unpleasant surprise when Mars retaliates against Earth for the unprovoked atomic missile attack.

Appearing in "The Man Who Was Killed In Time!"Edit

Synopsis for "The Man Who Was Killed In Time!"Edit

A man uses a time machine to unintentionally run himself down in an automobile.

In "The Last War on Earth" the scientist states that 500,000 years ago Earth was without life. Even in the 1950s this was nonsense as it was known that life had been on Earth for millions of years. In fact, in Weird Science #15's "Captivity" it is stated that life existed on Earth 500 million years ago.

Retrieved from "https://eccomics.fandom.com/wiki/Weird_Science_Vol_1_5?oldid=8191"
Community content is available under CC-BY-SA unless otherwise noted.